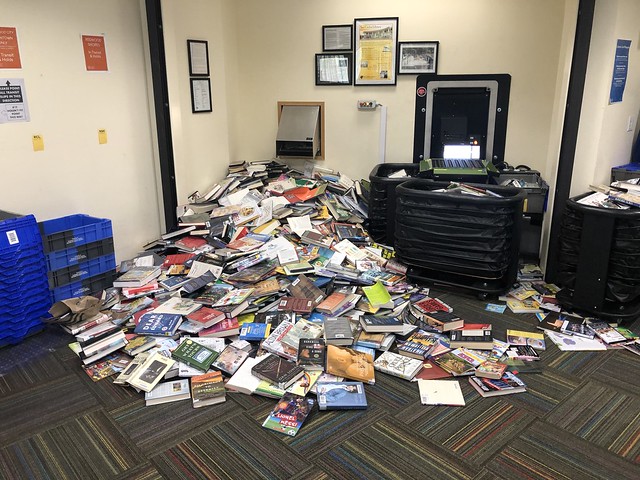 I’m halfway into Steve Hyden’s This Isn’t Happening and a few dozen pages into Kim Stanley Robinson’s The Ministry for the Future. So, as usual, here’s my breakdown of my reading for the year of hindsight:

The pandemic hit me as a reader. I didn’t feel as into the reading that I did. I didn’t have the same reading highs as I have had in previous years. I chalk that up to the damping effect of sheltering in place with low-key high levels of anxiety for the majority of the year. Maybe I made some poor reading selections, but reading wasn’t the respite I could have used this year. Sure, I read fewer books, too. That’s not really the point; I do think I might have read a few more books in a non-pandemic year, but I think this is close to my reading capacity while still trying to be a present dad that no longer has weekends/afternoons for selfish page-turning right now. (Side note: Ally pointed out that we read a ton of board books everyday with the kids. If Besos for Baby was included on this list, my reading count would be straight-up astronomical.)

I almost hit my goal of averaging a book of poetry a month. The books I did read were great. The Danez Smith collection (mentioned here) and Hanif Abdurraqib’s most recent collection were easy highlights.

I read two books by Olivia Laing this year, The Lonely City and Funny Weather. They were both wonderful and sent me down a spiral reading about a handful of artists I didn’t know much about like Chantal Joffe and Louise Bourgeois. The Lonely City also got me to listen to a bunch of Klaus Nomi this year.

I flew through all Martha Wells’ Murderbot series. As quick, fun sci-fi, it was my ideal semi-conscious, falling-asleep series of books for a chunk of the year. Likewise, Susanna Clarke’s long awaited follow-up novel, Piranesi, was short, engaging, and made me hope she’ll put out more work more frequently.

Charlie Kaufman’s debut novel, Antkind, is the most Kaufman-y thing he’s made and the funniest book I read all year. Also the most tedious. It’s not worth trying to summarize the plot about a film critic trying to write an academic book about the greatest film ever made of which only one person has seen and of which only a single frame still exists and so this critic uses hypnosis (and other methods) to attempt to recreate the reclusive filmmaker’s opus in his mind. It’s that kind of book. There’s a tangential plot line around a U.S. president named Donald Trunk who falls in love with a robot of himself. There’s nerdy film humor that made me enthused about rewatching Symbiopsychotaxiplasm. There’s a bunch of complaining about the films of Charlie Kaufman. You get it.

A Third University Is Possible was such an inspiring read at the beginning of the year that I ended up folding it into a class I was teaching, inviting K. Wayne Yang to close the Speculative Education Colloquium, and riffing on it in my own writing for future publications. I also really enjoyed Alex Rosenblat’s Uberland as representative of the possibilities of ethnography in the era of social infatuation with “algorithms” (ahem).

Comic books: I really liked Carmen Maria Machado’s horror story, The Low Low Woods. Tillie Walden continues to be one of my favorite comic creators and Are You Listening was no exception. Ines Estrada’s Alienation was confounding and I hope others read it so we can talk about it.

Finally, earlier this month a colleague recommended Maria Konnikova’s The Biggest Bluff, a book I missed in the middle of **all of this.** I flew through it. It made me miss poker, think about how I assess professional risk, and consider how limited information occludes some of my decision making.

The last concert that I attended was seeing Destroyer in San Francisco at the end of February. I consistently listened to his most recent album (contributing to this post’s title) throughout the year.

Early in the year, I picked up a copy of Cory Daye’s 1979 record, Cory and Me. The album isn’t on the major streaming platforms and disco dancing with the family to this record has been one of the real highlights during our sheltering in place.

Aside from this record, I played a lot of the new Fiona Apple, Black Dresses, Phoebe Bridgers, Haim, and Hayley Williams albums for my kids.

A good chunk of my time in quarantine was spent listening to 75 Dollar Bill, Moor Mother, Boris, Angel Bat Dawid & Tha Brothahood, and PJ Harvey’s smattering of demos. I spent a bunch of money supporting these bands and smaller artists on Bandcamp throughout the year.

Three other quick thoughts from this year’s listening:

Finally, Mac Miller’s posthumously released Circles haunted my 2020. Thematically, “Good News” is the song that feels 2020 to me.