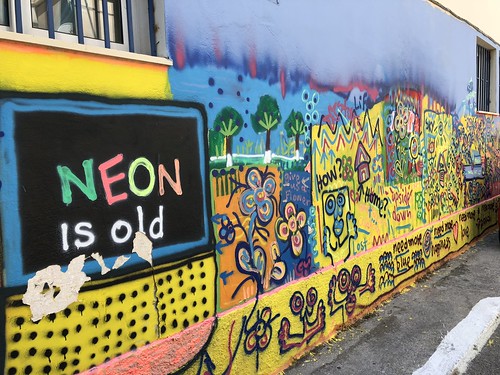 I just finished the A-side of Jeff Jackson’s Destroy All Monsters and it will probably be the first book I finish in 2019. And so, I think it’s time to round-up my reading from the past year:

The easiest recommendation I can make is for everyone to read my friend Nicole Mirra’s book, Educating for Empathy. I’ve gotten to work with and learn from Nicole for more than a decade at this point (how is that possible?!) and this book is a great, accessible synthesis of many of her key pushes on civics, empathy, and literacy. Everyone should read it and it looks like this:

The best novels I read this year were There There (where the quote in this post’s title comes from) and An American Marriage. These are critically acclaimed works and show up on everyone’s year end lists for good reason (I see you, Barry!).

The sci-fi novel The Player of Games was the exact mixture of ethnographer-studies-games-of-foreign-cultures-but-also-in-outer-space that made it the Antero-equivalent of catnip.

I read a bunch of comic books this year and that included digging into the 9 volume collection of Naoki Urasawa’s Monster; it was one of my more sustained engagements with manga and I really enjoyed the entire run. Sabrina is the highbrow graphic novel that I’m not sure if I liked but is a good conversation starter. Mark Russell & Mike Feehan’s The Snagglepuss Chronicles (yes, that pink cat) is amazing. Snagglepuss is a playwright frequenting the Stonewall Inn and facing MaCarthyism head-on. It is timely, poignant, and tragic.

Moxie is the YA novel that made me listen to a bunch of riot grrrl records for the first time in ages and if it introduces younger readers to the likes of Kathleen Hanna, 3rd wave Feminism, and the Sharpie-and-glue-and-scissors world of zine making, then that is awesome. The reality TV junkie in me also really liked Nice Try, Jane Sinner.

Virginia Eubanks’s Automating Inequality and Christopher A. Paul’s The Toxic Meritocracy of Video Games are both books I read for different research projects that I think could be of interest to general readers (the titles are pretty self-explanatory).

In terms of music, Janelle Monae’s Dirty Computer was my favorite album of this year and an incredible, moving live show.

YouTube informs me I listened to this cover of Kendrick Lamar’s “LOVE” an embarrassing number of times. Ditto the Mac Miller Tiny Desk Concert.

Finally, I’ve been listening to this old Modern Lovers live album a lot while writing at night. “Morning Of Our Lives” feels like the kind of optimistic psalm to usher in the new year.