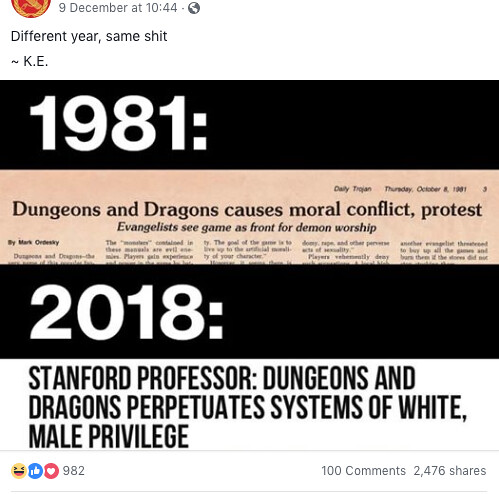 Oh that? That’s a meme going around some corners of the internet. It’s building off of the Breitbart article that is ostensibly about my research. I wrote about the first time that went viral here.

This new remix on this headline suggests that the fear-mongering around Dungeons & Dragons in the 1980s is somehow the same as critiquing the game’s reinforcement of gender and racial tropes and stereotypes. It’s usually brought up by people with brief hashtags or notes like this:

It never went away. pic.twitter.com/Mq6Mp6SLqK

Let’s unpack this a bit. The Satanic Panic of the 1980s was a significant moment in gaming culture and highlights the threats to imagination manifesting in ways that look strange and unfamiliar to mainstream culture. It is also part of a cycle of fearing new forms of (generally youth) culture. Notable examples post ’80s include Marilyn Manson, the Matrix, video games, cell phones, Snapchat and many, many others. Within this context and as a part of the formative years for tabletop roleplaying games, the fear of 1980s remains an important moment for understanding the genre and the kinds of fragility that remain in tabletop and video gaming culture today.

At the same time, I also want to note that the fear of “demon worship” in the first headline of the meme is not the same as critiquing white and male privilege. I think this is a really important point and the fear of the 1980s is not the same as acknowledging—let alone critiquing–privilege 50 years into the history of D&D. As I note in the article that kicked off this dust storm, D&D is a gaming system that was made by white men, built on tropes and stories largely written by white men, and—at least at first—primarily played by other white men (who were being swayed to join the new genre of play, adapted from historical wargaming systems). To be clear this research isn’t focused on how D&D “perpetuates” problematic tropes—contrary to the Breitbart headline. It is instead looking at how histories adapt and shift and inform over time.

This later point gets to the other piece of this meme that really bugs me: the headline doesn’t actually represent what my work is about in the first place! One of the reasons I wrote this article was to both deeply excavate the historical systems that mediate every interaction at the Dungeons & Dragons gaming table and also to draw parallels to other—non-gaming—contexts. As some grumpy commenters noted, some of the language in the earlier editions of the game no longer exist in the current edition. What I want to recognize is that, smoothing over language, rules, and representation in previous versions of the game does not erase history. Further, race, gender, and privilege assert themselves within particular contexts.

Additionally, this article was focused on the niche context of illuminating cultural-historical research. I’m quoting slightly at length from the conclusions of this paper to highlight the methodological takeaways I focused on for this study:

Although there is an abundance of insightful research into how games shape socialization and learning (in both digital and nondigital contexts), such analyses cannot be studied as if games are isolated from the cultures that influence them or in which they are embedded. This study’s findings reveal two methodological stances to consider when looking at communities of gaming, schooling, and myriad other learning contexts:

Although cultural-historical analyses often attend to the preceding first point, the human-built foundations within systems may more easily be overlooked. Particularly as educational research considers biases, oppression, and equity in varied communities of practice, the role that cultural artifacts play in the shaping of meaning and understanding must be unpacked.

One task of researchers is translation. Explaining the practices, experiences, and analyses from one context and making them coherent for academic peers is central to how my work is evaluated. Unfortunately, this means that my translational work is focused on a community that’s historically elitist in our language practices and in the fences put up around our work; the article in question is behind an academic paywall (though there are plenty of online places that are sharing linked PDFs and I am happy to furnish this work for others). Taking the nuances of the cultural-historical research around tabletop roleplaying and explaining it to other educational researchers often means presenting things that are seemingly obvious to the tabletop community and explaining them to a new audience. And so I often explain this work to gamers and it’s pretty mundane to some. At the same time, acknowledging a history that was made by particular individuals with their own cultural values has posed as a threat to the closed off, protectionist practices of gaming spaces.

To this last point, the title of this post is only trying to be slightly provocative. I do think there is a need to dig into the nuances of a gamer fragility and the explosion in interest, think pieces, and popular books around white fragility. Several recent books have been helpful in contextualizing gamer fragility, even if that’s not the vocabulary the authors use. Part of what—I think—contributes to the vitriolic response to the Breitbart article and the subsequent memes around my work is the insecurity of presumed outsiders critiquing or looking closely at history, culture, and power in games. It’s true of systems of writing, language, schooling, and youth popular culture. It’s largely the push against what much of my career has focused on to date.